This street is one of the oldest streets of the city. Back in the 1760s the first three Jewish estates appeared here, and the street was called “On Three Houses”. Intensive construction has started here in the second half of the 19th century, but the best buildings, mainly the three-story ones, were built in the early 20th century.

During its history, the street has switched its name for many times. One of its old names is Tysmenytsia Road. The name appeared because the street’s beginning was at the Tysmenytsia Gates of Stanislaviv fortress, and it led towards Tysmenytsia settlement. In 1884 it was named Sapiezhynska Street in honor of the descendant of the famous Polish magnates, Leon Sapieha.

At the times of the Western Ukrainian National Republic this street was named after Shevchenko, at the Soviet times it became Radianska Street (Soviet Street), and the German invaders in 1941-44 called it in honor of Adolf Hitler. In 1993 it became Independence Street.

This street was the financial and business center of the city. The famous banking district begins here – a complex of four stone houses, adjacent to each other in a square shape. This block is located between Independence Street, Shashkevych Street and Hrushevskyi Street. It started from the elegant building of the restaurateur Hermann Bass, built in 1897 (Independence Street, 19). In 1911, after the owner’s death, the Mortgage Bank redeemed this stone house from the widow of Bass. Since then, the building has been accommodating only bank institutions. 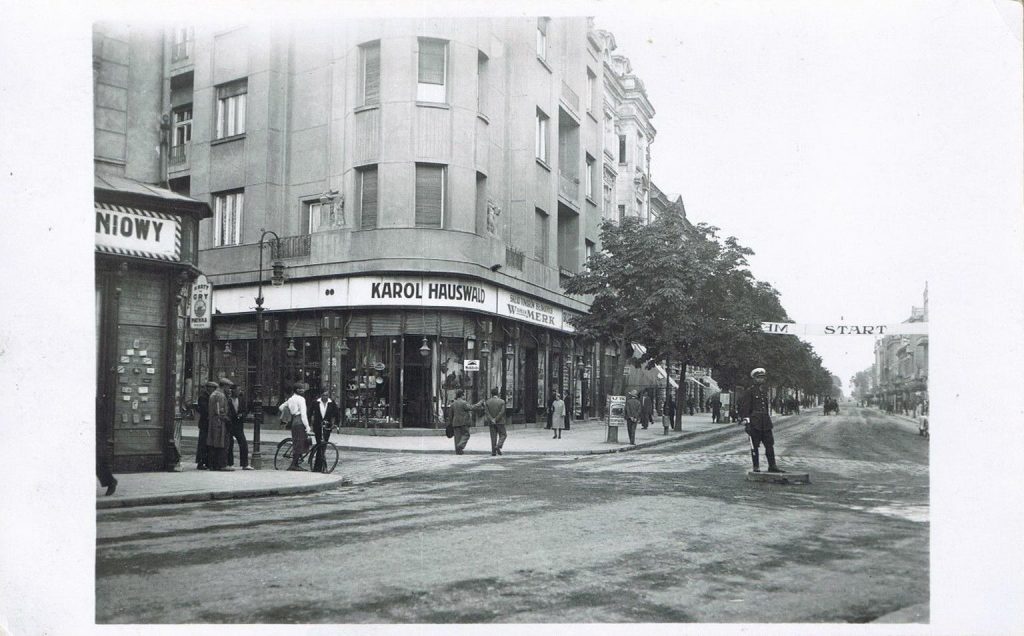 At the turn of the nineteenth and twentieth centuries, the beginning of Sapiezhynska Street was called “A-B Line”. The name was also used in other European cities. At that time it was common to call a number of house facades a “line” and mark these lines by letters. For example, in Krakow on the Market Square there was not just “A-B Line” but also lines C-D, E-F and G-H. The Stanislaviv “A-B Line” was the most luxurious part of the city, its beginning was at the Kajetan Kopać grocery store and its ending was at the hotel “Under the Deer”. Chic stores, cozy cafes and restaurants were located here. Now this is a segment from the beginning of Independence Street to Shashkevych Street. 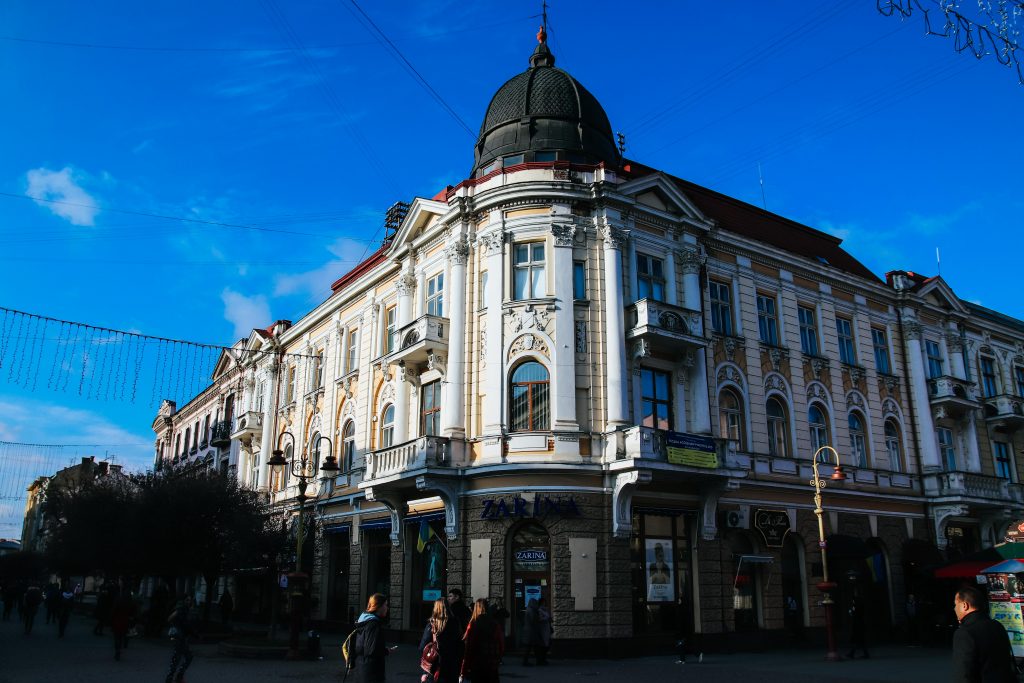 In 1900 this street became even the “sweetest” in the city. On June 12 of that year a sweets shop of Jan Noworolski and Wladyslaw Krywitski was opened in the building of the Mishchanskyi Bank (Nezalezhnosti St., 15), for many years it was the best sweets shop in Stanislaviv. In 1910, the shop set a peculiar record – they baked a huge cake and placed it at the shop window for advertising purposes. An interesting city tradition was associated with this shop: school graduates were posting their group photos in its window to show it to everybody who wished to share their joy with the graduates.

In July 1902 this street became a “golden” one. It resembled the Ali-Baba cave, since it was littered with jewelry and expensive watches. A thief sneaked into the shop of the local jeweler Bergman. The stealer loaded himself up with jewels and tried to disappear. But a patrol policeman was just walking by and he immediately started chasing the thief. Then he was subsequently joined by several other guards. In order to halt the pursuers, the stealer began to throw jewelry, so soon a large part of the street was littered with silver and gold. But this cunning move did not help him – policemen grabbed the thief and only then collected all the jewelry.

The first city cinema “Urania” moved into the building in Sapiezhynska Street, 10 in 1909 (now the building of “Ukreximbank” is there). In August 1909 a short fairy tale movie “The Kaleidoscope” was on in that cinema. That was the first color film to be seen by the city dwellers. The equipment of the cinema was bought from the famous French company “Pathe Freres”, which bought all the rights for the cinematographic apparatus from the Lumiere brothers in 1905. This film studio has also invented a method to paint black and white frames with the help of color stencils. In May 1912 city residents watched a movie with subtitles for the first time. The American movie “Discovery of America by Columbus” was on at “Urania” cinema.

In 1912 the first five-storey city building appeared in this street – hotel “Union”, which became the highest building of Stanisławów (Independence Street, 4). During its construction for the first time in Stanislaviv concrete structures were applied. In addition, the hotel was equipped with an electric elevator, which was a real sensation for the city then. Its operation was possible due to a private power plant located in the courtyard. 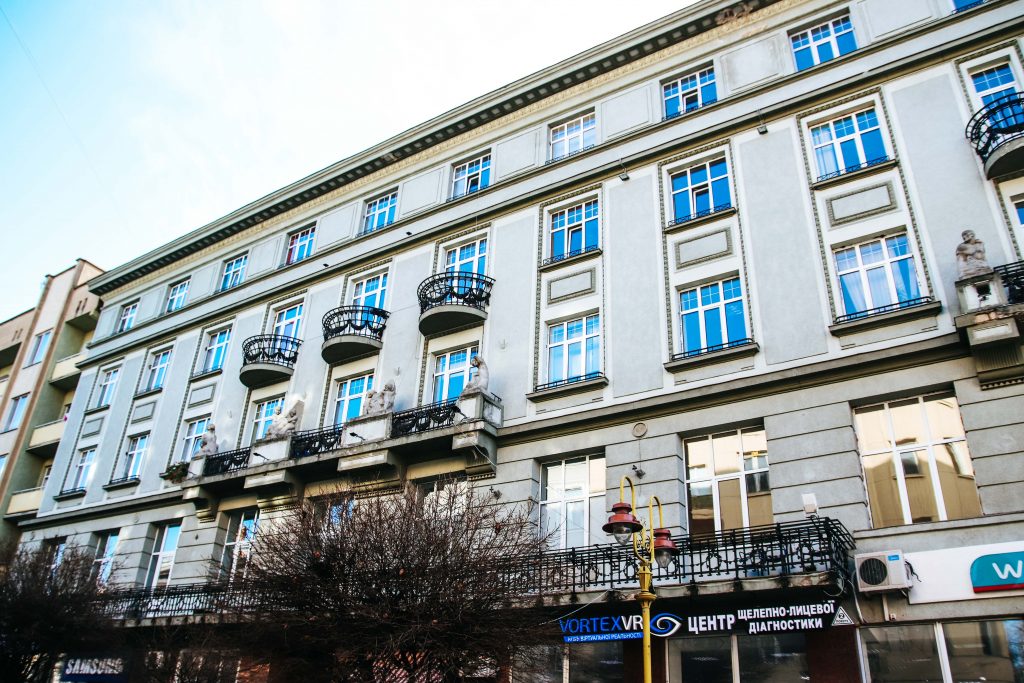 At the end of the nineteenth century, this street became even the most “drunk” one in Stanislaviv. Around 1880 a local merchant Moises Kron built a one-story house here and opened a “propination” in it – a facility for vodka selling. Alcohol could be bought in bottles and also dispensed. Propination was one of the most important sources of filling the local budget. For example, in 1900, the budget of the city by one third consisted of income from propination. In 1912 hotel “Union” was built on the place of propination.

The history of this street is connected with the life of many famous people. Above the “Union” coffeehouse in the Bass’ building the office of the famous Ukrainian lawyer and patriot Józef Partycki was located. It was at Partycki office that Dmytro Vitovskyi, one of the founders of the Western Ukrainian National Republic, was practicing law. At today’s address Independence Street, 18 in a stone building the private office of dentist Roman Yarosevych was located. This was a well-known public figure, ambassador to the Reichsrat, head of the association of railway doctors of Stanislaviv. Family of the famous memoirist Tadeusz Olszanski for a long time resided in Independence Street, 29.

Among people, the beginning of the Independence Street is called “one hundred meters” or “sotka”. This is a pedestrian part from Vichevyi Maidan to the intersection with Vahylevych Street – Sichovykh Striltsiv Street.

This name is arbitrary, because the true length of “Sotka” is 420 meters. Previously, the entire street was open for transport, but in the early 1980’s its part from the beginning to Shashkevych Street was restricted for transport and made the pedestrian street. Ostensibly this section was 100 meters long.

Later, the pedestrian zone was extended, and the informal name has been applied for it. According to another version, in 1984 a cafe called “Molochne” (translated as “Milky”) was built in Komarova (now Shashkevych Street).

In order to accommodate the summer open patio, the entire street was restricted for transport, and the length of that short street is just 100 meters. Later the adjoining Radianska Street became a pedestrian zone, and this popular name has been applied for it too. 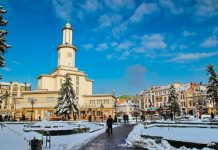 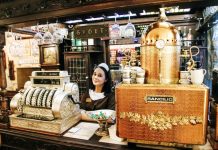 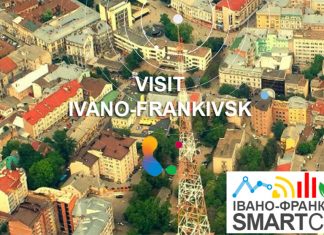 “New Energy” – a place of magic and science